By Valerie Whiffen on Wednesday, December 6, 2017 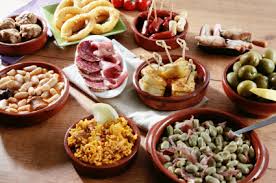 Several years ago, we stayed in Rome at a small hotel that was run by a German named Carl.  Carl was married to an Italian woman.  In an early conversation, he gently warned us that we should be very careful about respecting Italians’ food culture because they are offended by tourists’ ignorance of it.  For instance, Carl warned us, never ask for a café latte after noon.  Italians believe that milk upsets the stomach when it is taken after breakfast.  He also cautioned us not to eat gelato or any other food while walking down the street because doing so is considered vulgar.  And don’t even get them started on which kind of pasta goes with what sauce…

A couple of weeks later, we found ourselves in Florence at Sunday lunchtime.  The restaurant was pretty upscale for us and the Italian customers were dressed to the nines.  Sunday lunch with family is an important occasion for Italians.  A rather boisterous group of British tourists sat in the corner.  If you’ve travelled to Europe in the last 20 years, you will know that Brits are the new Americans.  After lunch, one of the Brits asked for “ice cream in coffee” which the waiter politely explained is not available in Italy.

We looked at our plates and tried to pass as Italian.

We’ve taken to labelling our luggage with Canadian flags since then.  Just to eliminate any confusion about our accents.

Since that trip, all of our overseas travel has been to the UK and Ireland.  So we forgot the Quel Fromage lesson when we recently arrived in Spain.

Everyone knows about the Spanish siesta.  The stores shut for 2 to 3 hours in mid-afternoon and re-open around 6 pm for another 2 to 4 hours.  What we hadn’t appreciated is that siesta is intimately linked with Spanish food.  The Irish fellow who ran the hotel where we stayed in Malaga warned us, but, unlike Carl,  he didn’t give us the full picture.  He only told us when we arrived at 4 pm that we wouldn’t find anything to eat for another 4 hours.

We passed the time googling restaurants, and found a tapas place around the corner that seemed to meet our needs.  Google told us that it opened at 7:30, and the English language reviews were excellent.

Eagerly, we arrived at 7:25.  Soon two couples joined us,  chain-smoking cigarettes while lounging against the makeshift tables made from wine barrels outside the dark bar.  We’d read that you had to get to there early to get a seat, so somewhat anxiously, we jockeyed for position.  At about 7:45, the side door opened.  The couples stubbed out their cigarettes and were admitted warmly by a waiter.  We were barred with a terse “Cinquo minutos.”

Oops, the two “couples” were staff.

The waiter dragged tables and a sign listing that day’s specials onto the pavement.  His harrumphing and body language communicated clearly that we were inappropriately early and in his way.  Finally, he admitted us to the small bar.  Eventually one of the smokers, our waitress, poured us two glasses of red wine.  Okay, so wine must come with the meal; we’d read that about some restaurants.  Another long wait then she returned with a scratch pad to take our order.  After flying 14 hours overnight then waiting another several hours for food, we were pretty hungry.  And we were thinking that tapas are snack food, like in Canada, so we ordered five dishes.  At the fifth, she exclaimed “Finito” with a definitive gesture of cutting us off.  Startled, we thought she might be a little grumpy with us for making her start work sooner than she’d wanted.

Then the dishes appeared.  They were huge.  Tapas are meant to be shared, so an order of potatas bravas is big enough to accompany a Sunday roast for the average-sized North American family.  As the place filled up, we noticed the customers around us sharing one, maybe two, plates.  Uncomfortably, we ploughed through the mountain of food, feeling a little bilious by the end because most tapas dishes are fried and unless you mix in a few stew-y dishes you end up consuming a lot of fat.

Then the bill came: 13 euros for five dishes and we hadn’t even been charged for the two glasses of red wine each.  What a deal!  Or maybe they’d made a mistake?  We left cash and beat a hasty retreat.

When we got back to the hotel, I thought it might be wise to google Spanish food before we blundered into any more restaurants.  There it was in black and white: the Spanish take their main meal at lunch time.  Tapas is a tiny meal that they eat mid-evening, mostly to socialize with their friends and family.  And each tapas dish includes a glass of wine. 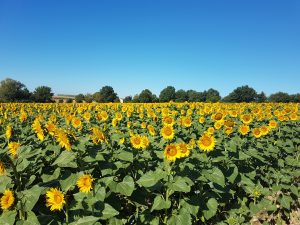 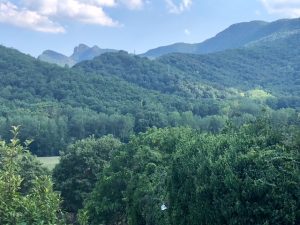 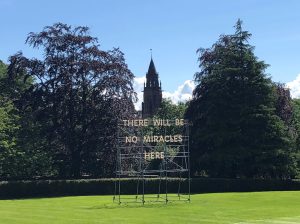