The Coast to Coast Path Travel

The last two days of the C2C are brutal. Back-to-back days, that clock in around 35-40 km each, terminate in Robin Hood’s Bay on the North Sea coast. The first day took us from Claybank to the village of Glaisdale, and the second from Glaisdale to Robin Hood’s Bay. I committed to walking the first then considering the second.

The first day started out well. Another glorious morning and another smiling Valerie on the uptrack.

Leaving Claybank in the morning

Our goal was to reach Blakey Ridge by lunch time. The walk is 12 km, but it follows a ridge line through moor, so it’s relatively easy terrain. As an added incentive, the Lion Inn is located at Blakey Ridge. The pub is the only place that C2C walkers can stay between Claybank and Glaisdale. Sadly, we had booked too late in the season to get in, which is why we had stayed at Claybank instead.

We walked along at quite a clip and reached the pub with 15 minutes to spare before the lunch time tour buses arrived. To a C2C walker, the Lion literally appears out of nowhere across a vast stretch of moor. In the photo, it’s that tiny bump on the horizon.

Our first glimpse of the Lion Inn at Blakey

The pub didn’t disappoint, either for its ambiance or its food. Established in 1553, the inside doesn’t look to have changed much in the intervening centuries.

Interior of the Lion Inn

And the food was amazing. We (literally) pigged out on roast pork sandwiches with stuffing and apple sauce. And, of course, the ubiquitous side of fries. Yum.

Lunch turned out to be the best part of the day. The second half of the day’s walk is described in the guidebook as going through the kind of bucolic villages that people think of when they think of England. There is a pretty village, but it’s Glaisdale, at the end of another 15 km of moor. It took us pretty much all afternoon to walk across along that ridge in the far right of the photo.

Our reward at the end was the sight of Glaisdale.

But by then we had walked 37 km — a personal record. The B’n’B owner told us that the only place to eat in the village is the pub, which is located a 20-minute walk downhill from her farm (and hence uphill on the return).  We decided to eat the chips, sausage and cookies in our backpacks instead. Thank goodness for that pub lunch! This was another one of those nights where I was in bed before 8.

The following morning, I found the train schedule. I walked the 8 km to the nearest station at Gromont then abandoned Julian. He looks sad, but actually, he steams along much more quickly than I do, so I think he enjoyed his solo walk to Robin Hood’s Bay. He caught up with and passed some of the people we’d come to know on the C2C. Everyone was in a celebratory mood. One couple, who we’d first encountered five days before, dressed up as Pebbles and Bam-Bam for the occasion. Julian didn’t ask.

When I got to Robin Hood’s Bay, I decided to visit the free museum. Local museums are a way I quickly get a feel for a place. That day the volunteer who staffed the museum looked like a grizzled former member of an 80s punk band. He turned out to be a retired fisherman who can trace his roots in Robin Hood’s Bay back to the middle of the 17th century. He was opinionated and informative. The first thing I learned about the Bay is that it’s a Tidy Town. Yikes! Is there anywhere authentic left in the UK?

Yes, the Bay is too cute for its own good. Most of the houses are renovated and rented out as holiday homes. My fisherman can only afford to live in the nearby town of Whitby.

The second thing that I learned is that Robin Hood’s Bay has nothing to do with Robin Hood. Nottingham is more than 200 km south. It’s unlikely that Robin Hood the person wandered that far from home. In the middle ages, most English place names dropped the first consonant. So back in the day the name of the village was likely ‘ood Bay.

The association with Robin Hood probably came later when the village developed a reputation for smuggling. Bribes were handed out whenever the smuggled goods — primarily cognac and lace from France — changed hands. Everyone from the fishermen to the local vicar was in on it.

Sensibly, the locals now just call it the Bay.

My curiosity sated, I met up with Julian at the B’n’B where we got ready for the final rituals of the C2C. Walkers take a pebble from the beach at St. Bees on the west coast and toss it into the ocean on the east coast. By this time it was late afternoon. The route to the beach was full of jubilant walkers as they staggered in from their momentous final day’s walk. We took a picture for two middle-aged women we met at the shore, and they returned the favour. I hadn’t done the whole C2C, but I had walked 130 km in six days, which is pretty damned good. Julian — the walking god — had covered almost three times that distance in 15 days. 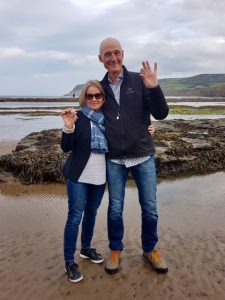 With our pebbles at the beach in Robin Hood’s Bay

For the final C2C ritual, we retired to the Wainwright Pub (remember him?), where Julian had a traditional pint of Wainwright beer. We sat outside in the late afternoon sun, along with the end-of-term holiday-makers who thronged the small plaza in front of the shore. A man appeared walking two, gorgeously-groomed Afghan dogs. Out of nowhere, a runty, ratty-looking terrier decided that the Afghans were not dogs at all and needed to be seen off. He charged and barked at them. They reared on their back legs like thoroughbreds. The terrier’s person was mortified and tried to catch him. But the terrier belted up the stairs behind us and legged it straight into the pub, his person in hot pursuit.

And so the C2C walk came full circle.