Overtourism. A word so suddenly relevant that the Oxford Dictionary included it in the 2018 list of new words. Around the world, popular tourist spots are struggling with a massive influx of visitors. Rome introduced a list of rules for good behaviour. Iceland closed vandalized caves. Amsterdam simply asks us to stay away. I want to travel, but how to do it in a way that doesn’t contribute to overtourism? A recent article in The Independent observed that overtourism is always concentrated in a few spots. Hotspots can be avoided by visiting places that foreign tourists don’t usually go and by going off-peak. Our trip to Northumberland put these strategies to the test.

Northumberland is the most northerly county in England, right on the Scottish border. Traditionally, this was disputed territory. The Roman emperor Hadrian built a wall here to keep the Scottish tribes out. Henry VIII and his daughter Elizabeth were so concerned about Scottish raids that they constructed a fort and massive defenses. And — for you Outlander fans — Bonnie Prince Charlie fought his way through Northumberland on his quest to claim the English crown in 1745. For centuries, parts of the county constantly changed hands. This history gives Northumberland a unique feel and a ton of historic stuff to see. But very few foreigners visit. I know this for a fact because everywhere we went, we met with wonder, “You’re from Canada? How did you get here then?” That’s if we could understand what they were saying. Fair warning: the Northumberland accent is almost incomprehensible.

Following is a highly subjective list of the best things to do here.

Walk a beach, any beach

The frigid North Sea laps the Northumberland shore. A 65-km stretch from Amble in the south to Berwick in the north is an Area of Outstanding Natural Beauty (AONB), which means it is a conservation area. The beaches are wide, sandy, clean and virtually deserted — at least in June when we traveled. I suspect they get a bit busier when the school term finishes in early July.

Any number of beach walks are available. Some walks go between villages. Others incorporate a pub stop or a castle.

The weather coming in off the North Sea makes for spectacular photographs. Below, the first picture I took is the view of what we were walking toward

while this is what it looked like behind us.

Here’s another beach, another day, and another striking sky:

We walked three beaches on three different days and they all were fantastic. And empty.

Except for these strange creatures, commonly known as a Stu-ie bird.

On Sundays, the English like to make lunch their main meal then go for a walk. One popular walk goes from the former fishing village of Craster in the south

to the ruins of Dunstanburgh Castle.

Dunstanburgh is one of many Northumberland properties that is managed by the National Trust, a charity that is dedicated to preserving landscape and buildings of historic interest. Membership got us free admission to most of the places I mention in this blog.

Dunstanburgh was a vanity castle, built by the Earl of Lancaster to compete with his king. It served no military purpose and it was home to only a handful of soldiers in Lancaster’s employ. No doubt they wondered what they’d done to deserve banishment to such a remote place.

There’s not much to see in the ruins. The best part was the birds, which nest in the long sweep of cliff below the castle. The place is alive with noise, and you can easily get close enough to see parent birds feeding babies in their nests.

We continued on to the village of Low Newton-by-the-sea, where there’s a popular pub and craft brewery called The Ship Inn. 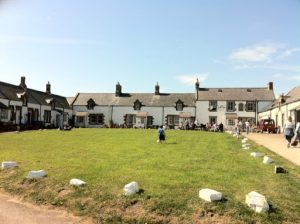 That’s the pub at the back of the square on the right-hand side, where all the people are. The inn is tiny, so most people sit outside at picnic tables. (This is a peculiarly British custom — to sit outside in blustery 15 degree weather, wearing shorts, sandals and a fleece top). I understand from Julian that the inn makes a very decent ale.

The houses on the square used to be occupied by fishermen and their families. Now, of course, you can rent them through the National Trust. Yes, Low Newton is a Tidy Town. Even the wilds of Northumberland aren’t immune.

The Holy Island of Lindisfarne

The Holy Island is a very cool place. It’s a tidal island, so accessible by car or feet only at low tide. You have to check the charts posted at the beginning of the paved causeway to see if it’s safe to cross. If you haven’t left the island by the time the tide comes in, you’re stuck there for another six hours. That might not be a bad idea. The island is popular at low tide, but everyone leaves as the safe period ends. We pushed it to within the last half-hour and found ourselves almost alone, except for the hundred or so residents. With a castle to visit and several good pubs and restaurants, on a nice day this would be a great way to pass the afternoon.

Several monks who later became saints lived on the island. In the 6th century, the Catholic Church built a monastery to protect the community from raids by Danish vikings. The priory — which is now in ruins — was occupied until Henry VIII destroyed every Catholic Church he could lay his hands on after his break with Rome.

Another National Trust property, Lindisfarne Castle began life as a fort. Henry built it to guard against a Scottish invasion. The Scots never did attack it, and after the countries united to become Great Britain, the fort was abandoned. Two hundred years later, a London-based magazine editor bought and renovated it in the Arts and Crafts style, which is what you see now. He entertained his many illustrious friends here, including the famous gardener Gertude Jekyll who designed a walled garden for him. 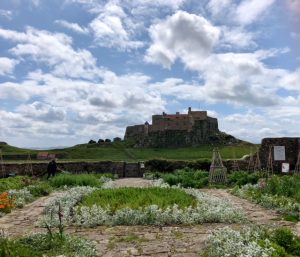 Lindisfarne Castle from the walled garden

A well-preserved portion of Hadrian’s Wall is about a 90-minute drive inland. The Roman Emperor Hadrian built the wall around 120 AD, in part because he was fed up with the duplicitous tribes occupying modern-day Scotland. Three times he supported a female warrior against her husband and three times she betrayed him. He did a cost-benefit analysis and decided in favour of the wall, which stood for 300 years.

Later, the local farmers — ever practical and entirely unsentimental — scavenged the stones to build their field walls. Hadrian’s wall wouldn’t stop any barbarians now, but in the day, they were 3 to 6 metres high.

The portion we visited is called Housesteads after the farm that was here when the property was donated to the National Trust. Property donations are commonly used in the UK to get around prohibitive inheritance taxes, which is why the National Trust has so many great places to visit. Housesteads has the best-preserved ruins of one of the Roman forts along the wall. Like all ruins, you have to use your imagination. The barracks are gone, but the footprints of other buildings are clearly discernible, such as the commander’s house with its in-floor heating and bath house.

Two towns made our list of places to visit in Northumberland.

Berwick-upon-Tweed (“Barrick”) is an attractive town with medieval walls, Elizabethan-age ramparts, and a tangle of photogenic rooftops.

While we were walking the walls, we stumbled onto a temporary exhibit of Turner paintings. Turner painted the English countryside 200 years ago, and he particularly loved northern England. The Berwick exhibition was especially meaningful to us because it includes watercolours of a number of places we visited on this trip. Including the view of Richmond Castle that I photographed as we entered the town.

Richmond from the West by Turner (circa 1816)

The view hasn’t changed much. And yes, he took artistic license with where he placed the river.

The town has been the seat of the Dukes of Northumberland since the 14th century when they were the most powerful landed family in Northern England. Today it’s a bit down at its heels, but not as dramatically as other UK towns we’ve visited. The High Street still has shops that cater primarily to locals. But there’s a puzzling preponderance of places to get a haircut. Alnwick must be going for the title of best-groomed town in the UK. (Another English custom is the crowning of places for obscure accomplishments — like “tidiest village”)

Alnwick has a large, still-occupied castle and a beautiful garden that was created about 20 years ago by the current Duchess. The admission price is steep, but gardeners can’t miss it. This was the only place in Northumberland that we encountered a tour group. Fortunately for us, they seemed more interested in the gift shop than the garden.

One of the most famous sons of the house of Northumberland was Henry Percy, aka Harry Hotspur. He was immortalized by Shakespeare in Henry IV as the epitome of chivalry. According to legend, his lovely moniker came from the Scots’ admiration of his prowess in battle. But Julian and I think the Scots might have been taking the piss. This wouldn’t be the first time the English misconstrued how the Scots feel about them.

Statue of Harry Hotspur in Alnwick

Last, but not least, kippers from the butcher in Bamburgh. Best. Kippers. Ever.

No wonder Northumberland was nominated as the best UK travel destination last year. If you want to avoid all the other foreign tourists, follow the locals’ lead.